As Cleveland celebrates the city's first sports championship in 52 years and the Cavaliers first ever title, we look back to the Cleveland Cavalier team of the 1991-2 season. They were a gutty team made up of hard working seasoned veterans like Larry Nance, Mark Price, Craig Ehlo, John "Hot Rod" Williams (may he rest in peace) and Brad Daugherty. Oh, and the team also included a sleek three pointer shooter named Steve Kerr. That team did not win a championship but the won the hearts of many with their grind and effort. After a 55 win solid regular season, they easily beat The New Jersey Nets in the first round playoff series. They then faced the favored Boston Celtics in what came to be Larry Bird's last season. While the bigs of the team, John Williams and Brad Daugherty, were maligned as being "soft" because of their finesse and fundamental play rather than their strength, they man handled the great Celtics of the Eighties in the last game of a seven game series to play in their first ever Conference Finals. In that series they met the Chicago Bulls, who were in the beginning of their dynasty in the 90's. While no one expected a big contest for the Bulls, this Cavs actually tied the series at 2-2 before losing to them in 6. Despite this, the players on this team will always be known for their grittiness, perseverance, and heart. #CAVS #CLEVELAND #CLEVELANDCAVS #BELIEVELAND 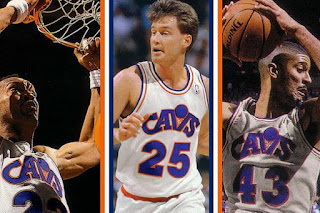