"THIS IS A BOWIE SONG"

And it happened on the night of November 18, 1993. The biggest band at the time, Nirvana, with the biggest front man, Kurt Cobain, finally played their MTV acoustic concert. You see, the "Unplugged" concerts that MTV started in 1989 were becoming a big phenomenon in the early nineties as artists played instruments to a small crowd that were not electrically amplified. This formula fit especially well in a time when rock artists were "dressing down" and the music was described as more substantial versus the stage and flamboyant exuberance of arena and glam rock. Now the music was stripped down to the essentials. And what better band to play at such an outing and for it to be broadcast, then the leaders of Grunge?
Well, something interesting happened in their paramount performance that night. Aside from performing with members of the band The Meatpuppets, Nirvana decided to play a cover of David Bowie's "The Man Who Sold The World"! What? The one group that you can blame for tearing down and abolishing Glam Rock with all its Eighties excesses were singing a song by the father of Glam Rock?
Yes, and this is attributed to the diversity and innovation of the great artist, David Bowie. Many times, Bowie reinvented himself and he was a master of knowing to not overdo any one of the personas he would undertake. His Ziggy Stardust alter ego made him a rock icon. But he only allowed that to last one year. Thus, it is no surprise that one of the covers of his songs was included essentially in staple Grunge album that went on become certified 5 time platinum. 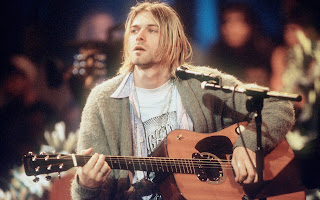