ONE OF THE BEST SPORT MOMENTS OF THE EARLY NINETIES

It was 1994 and it did not even happen on the sports field. Jim Rome had a talk show called Talk2 on ESPN 2 and the featured guest was Jim Everett, the former LA Ram and current New Orleans Saints quarterback. Rome kept taunting Everett by calling him "Chris" in reference to his relegating play in the past few years. After a couple of references, Everett warned Rome not to call him Chris again or else some physical confrontation would ensue. Jim Rome then did what he was told not to do and then this happened on live TV. AMAZING! Everret went on to have some more productive years with the Saints and a one year stint with the San Diego Chargers. He now has a successful asset management company. Jim Rome is still a sports talk show host on CBS Sports Radio. 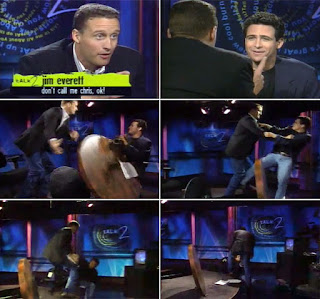