Obviously what is burning up in the movie theaters recently as we head for the final days of the summer is the movie "Straight Otta Compton". The movie, though filtered or not,  is a biography of the trials and tribulations of the band N.W.A from their beginnings, to there feuding and breakups, until the band member Easy E's death. Recurring themes in the movie include depictions of police brutality of inner city black youth that culminated in the Rodney King beatings and LA riots in 1992. Thus, in the early nineties, at a time when the band lost its member Ice Cube and eventually disbanded with the other members finding successful solo careers, their music became prophetic and middle America was seeing the realities of the inner city on their television sets. The brutal honest reporting that the members of the band reasoned for the music's controversial lyrics and glorification of gangster life was now becoming the most honest form of reality TV. But what the band also helped make happen in the early nineties was not just America's realization of the realities of the inner cities, but pop cultures obsession with it. Among the plethora of rap songs portraying and romanticizing life in the "hood" at that time, there also box office movies (ie. "Boys In The Hood" and "Menace To Society"), cultural trends, and fashion fads that dominated the American conscience at that time. The subgenre of gangsta rap that the group help develop will be seen as more than just a seminal moment in music history but their legacy may be credited with helping to bring a social struggle to consciousness in the annals of American history. 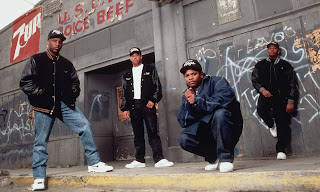