THE MAN, THE MYTH, THE LEGEND!

This legend is Michael Crichton. Jurassic World has just made over half a billion dollar this past weekend and credit has to be given to the man who wrote the story of the original Jurassic Park. Mr. Crichton was not only a writer, director, producer, but also a medical doctor. This consummate workaholic would spend weeks locked inside a room to finish his novels. Topics of his novels generally included biotechnology and failure of man's efforts to control it. In 1994, Mr Crichton had his simultaneous works as charting number one in television with his writing in ER, a number one film with Jurassic Park, and a number one book with Disclosure. 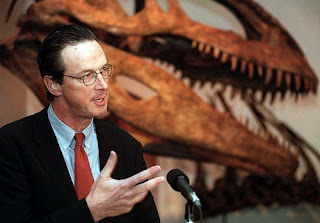