THE HIGHER YOUR RISE, THE FASTER YOU FADE!

Remember hypercolor shirts? These were popular in 1991. Manufactured by the Genera Sportswear Company of Seattle, these fabrics changed colors based on changing temperatures. The science involves the same concept as the mood rings, which were popular in the 70's.  Leukodyes, the color changing molecules, were encased  to the permanent colored fabric. The change in increasing temperature caused an increasing PH and that created a chemical change, allowing the molecule to release light instead of absorbing it. However, multiple washing and washing in heat would leave the fabric in a permanent, static color.
The genius in the science, however, did not correlate with management. From February 1991 to May 1991, in a three month span, the company sold 50 million worth of items. But, soon overproduction and mismanagement  led to "FADING" demand. One year later, in 1992, the company went bankrupt.
The shirts may have come and gone, but the memory of them changing colors on me after I received my test score in 1993 will be embedded in my mind forever! 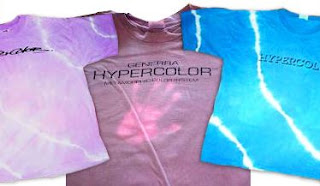