20 years ago, the 5 pick in the NBA draft was Kevin Garnett. Drafted by the Minnesota Timberwolves, he was the first player in over two decades to be selected from high school. He went on to have the best basketball career of anyone else in that draft year and won the MVP title in the 2003-2004 season. He finally won a championship in the 2007-2008 year when he led the Boston Celtics to the championship. Garnett's success paved the way for future high school athletes, such as Kobe Bryant and Lebron James,  to enter the NBA straight from high school until the "one and done" rule was implemented in 2005. 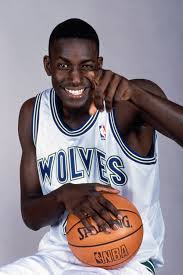