THE ANSWER IS NOT CLEAR!

In 1992, PepsiCo launched a clear non-caffeinated soda called Clear Pepsi. The launch was inspired from the early nineties fad that equated clearness with health and well-being. Coke soon followed suite with Clear Tab. Van Halen even sang a song for its commercial in 1993. However, the product was soon pulled of the market when sales went down. 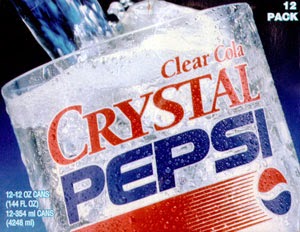