Tweerking Was Going On Before Miley Cyrus Was Even Born 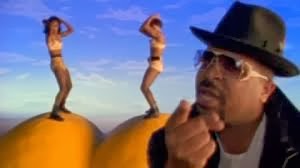 Back in the spring of 1992, the rapper, Sir Mix A Lot, had a big hit and, rather, an even bigger phenomenon with his hit "Baby Got Back". A tongue and cheek and  cleverly written ode to the particular female anatomy, this song was a huge success in making big rear ends sexy. Perhaps, Sir Mix A Lot caused a huge cultural awakening in the sex appeal of a large toosh that had never been explored like this before. The video was initially banned for worshiping too much of the anatomy, but was eventually regularly aired on MTV. Others like Wrecks n Effect with "Rumpshaker", and the 69 Boyz with "Tootsie Roll" followed soon in paying homage to the female buttocks, but Sir Mix A Lot definitely took the crown of this achievement. Girls would, as in a hypnotic trance, start their tweerk (although it wasn't called that back then) as soon as the intro of this song would fire from the speakers in any given club in the early nineties.

https://www.youtube.com/watch?v=kY84MRnxVzo
Posted by Unknown at 1:36 PM