In the early nineties, a recreational pressurized  water gun toy became a phenomenon. Developed by the Mechanical and Nuclear Engineer, Lonnie Johnson, in 1982, the product first went on sale in 1989. It became the biggest selling toy in 1991 and 1992. The toy appealed not only to children but also teenagers. In later years, new models of the toy emerged. 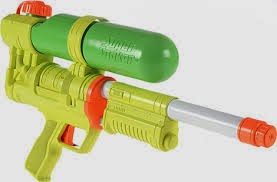