Magic Johnson Announces He Has The HIV VIRUS

In Nov of 1991, Ervin "Magic Johnson", announced that he had contracted the HIV Virus. He admitted to contracted the virus through multiple sexual partners while he was a player. The news took the world by shock as some predicted that Magic would not be around in five years. However, Magic still determined to play basketball, came back to take MVP honors in the NBA Allstar game in February 1992, in what featured a resounding last minute three-pointer by him. He later went on to play for the Dreamteam in the 1992 Summer Olympics and came back to have a further stint in the NBA. He helped bring awareness to what was a deadly disease at the time, and proved that you can survive and function while living with the HIV virus. 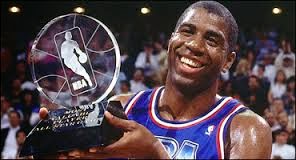