And then it happened.... Nirvana's "Smells Like Teen Spirit" was played on MTV and overnight glam rock with all its excesses and flamboyancy had taken a back seat to music that was more conscience, real, and substantial. What was "cool" now was "uncool" and vice versa. Arena rock was ousted by "Unplugged". Musicians, rather than taking on the persona of being bigger than life stars, were now rather expressing their vulnerabilities and looking like people who might be your friends. Image finally lost to substance...Well maybe? Yes, Nirvana and other alternative bands went on to dominate the music, fashion, and pop culture scene for the next 4 years. However, hair bands like Bon Jovi and Guns and Roses still had chart hits during this time. But, music and society in large had changed. As a sign of the times, I recall that 1992 was the last summer that the Sunset Blvd scene in LA would be dominated by pedestrians and bar hoppers being comprised of  long haired emulators of the metal scene. Now plad and looking plain had been making its long awaited comeback. 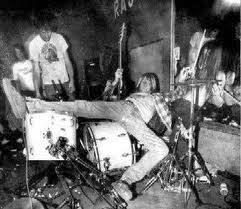