Seinfeld was a sitcom that premiered in the summer of 1989. Created by Larry David and Jerry Seinfeld, himself, it became one of the most successful comedy TV shows of all time. "A show about nothing" was based on the unexpected mishaps of Jerry's and his friends and aquaintances. Surprisingly, the final episode aired in the spring of 1997, while the show was ranked #1 in the Nielson Ratings 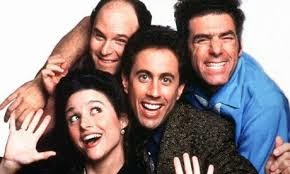